Everyday until spring training begins the "Respect Jeter's Gangster" blog will review one player from the Yankees roster. We will review a total of 27 players, the 25 we believe will be on the active roster after spring training, and 2 we believe should be on the active roster but won't be for one reason or another. Our reviews are all edited by Carl Pavano himself to insure they're up to the stringent "Pavano Tough" standards.

Joba Chamberlain proved to be a solid arm out of the bullpen last season. His fastball/slider combination were like a right handed Randy Johnson, and batter did not stand a chance. This led him to a .38 ERA with 34 strikeouts in 24 innings. That .38 ERA was caused by a solo homerun by none other than my Puerto Rican brethren Mike Lowell in Boston. Jeter (pictured below being gangster) hit a three run homer later in the game to win it so it all worked out. 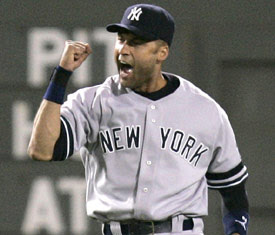 Although he only saved one game, it didn't take the imagination of M. Night Shyamalan to see that he could be Mariano's successor. However, Chamberlain came up as a starter, and the Yankees would like to see what he can do in that role. I certainly am too.
The trouble with Chamberlain, as with Hughes and Kennedy is that there will be an innings cap for these players. There are also 6 (maybe 7) starters competing for starting spots. Mike Mussina having his veteran prowess may end up in the rotation, which means one of the three kids needs to move to the bullpen or back to the minors. Obviously, Joba would be best suited for the bullpen, but a starting Joba may be better for a Yankees team whose most recent pitching shopping spree brought us Jaret Wright and Carl Pavano.
My Fearless Prediction:
Joba Chamberlain will start. He will win somewhere between 11 - 13 games. The innings cap will come close and he will move to the bullpen to finish the season. I can't say that I've seen his changeup, but he did mix in his curveball a few times last season, and it was pretty good. I am much more excited to see him start than to relieve. If he has trouble starting, the bullpen can be a backup choice for him.
Little Known Joba Fact: Typically we make something up in this section, but this time I actually have a little known Joba fact. Joba's birth name was Justin but his young niece pronounced it Joba. He liked it better and had it legally changed later. He also once ate a python for breakfast.
Joba Chamberlain Picture Source
Derek Jeter Picture Source
Posted by Fernando Alejandro at 6:22 AM