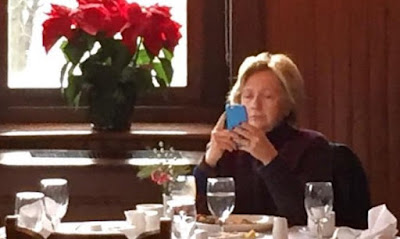 For days she had insisted that she was at least as good at baseball "as this Derek Jeter fellow." Despite appeals from friends and family, Hillary Clinton had spent much of the past week making her case publicly and privately that she was better at baseball than Derek Jeter, spontaneously bringing it up during several nationally televised interviews and appearances.

On Wednesday, while having breakfast in upstate New York, Hillary Clinton googled 'Derek Jeter,' only to realize she was not as good as Derek Jeter at baseball. The realization was captured by a photographer for the New York Times, and posted to Twitter by his colleague senior politics editor Carolyn Ryan.

Clinton has since called Derek Jeter to apologize, and has withdrawn her application to the Veterans Committee for induction to the National Baseball Hall of Fame.


I didn't use to have to do this, but the above was a work of pure fiction.