After years of funding, developing, and testing the "Respect Jeter's Gangster" blog has finally invented its own statistic for measuring baseball performance. This new tool helps aid scouts, players, fans, reporters, anyone who is interested in seeing what a player projects to look like on performance enhancers. PEDP+ or, Performance Enhancement Drug Projections Plus, uses projections from known PED users (thanks to Mitchell and Canseco for outing them) plus it shows the path their lives would likely take, again using projections from the aforementioned outed players. It's difficult to explain how PEDP+ works mathematically, but it comes with Barry Bond's seal of approval so you know its good. To be clear, we at "Respect Jeter's Gangster" are not claiming these players use PED's. We are instead showing you what they would look like on PED's and what the likely narrative for their life would be if they used PED's. Instead of showing you the boring equations, triangles, algorithms, myrrh, decimals and variables that make up the body of PEDP+, we would instead like to show you some real life examples of PEDP+:

The above picture shows Yankees ace Carl Pavano as his regular PED free self. It was taken moments before he decided to retire from pitching. However, if we take this same picture and adjust for PEDP+, the future Pavano projects to look like this:

Not bad, huh? PEDP+ projects that Pavano would come out of retirement, not to pitch, but rather to break POW's out of various prison camps throughout the world. After his 3rd trip it will become a bit redundant, but after waiting over 10 years he goes for a forth trip to rescue Christian aid workers who went missing near a Burmese village. Despite his philanthropy, Yankee fans still won't forgive him.

Moving on to our next projection:

Here's a picture of Yankees outfielder Johnny Damon. Johnny Damon is known for a slick glove and quick feet. He's also known for being a club house character, and getting the crowd riled up with his electric personality. Our PEDP+ projects the following for Damon:

The PEDP+ projects Damon will change his name to Ol' Dirty Damon and take his electrifying personality to a music studio where he knocks out hit after hit with a group of 8 friends. PEDP+ also projects the lead bass player to be Jason Giambi, with Miguel Cairo on the Tambourine.

The beauty of PEDP+ is that you can use it on anyone, not just baseball players. For example, this is a picture of the ever popular Mary-Kate Olsen. Upon our second read, we were able to confirm that Mary-Kate was not mentioned in the Mitchell report. However, PEDP+ can help us see what she would look like if she had been. Though it took more work from our statisticians, we were able to project the future PED using Olsen as such:

Oh my goodness, and some of you had a crush on this girl. The PEDP+ story line is a little screwy with this one. It starts with Mary-Kate bleeding on a sock and ends with her eating her twin. We thought it was too graphic to share all the details.

So there you have it folks, PEDP+ works, and to prove it, here's our seal of approval: 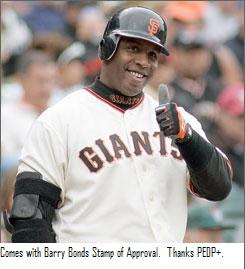 Posted by Fernando Alejandro at 7:09 PM

omg that is some funny shit. You crack me up Fernando. Check out the article did i miss something that i wrote on my blog. Better yet check out the link from it to Cerrones blog the man is a lunatic and I felt it my civic duty to point this out to all Yankee fans. :)